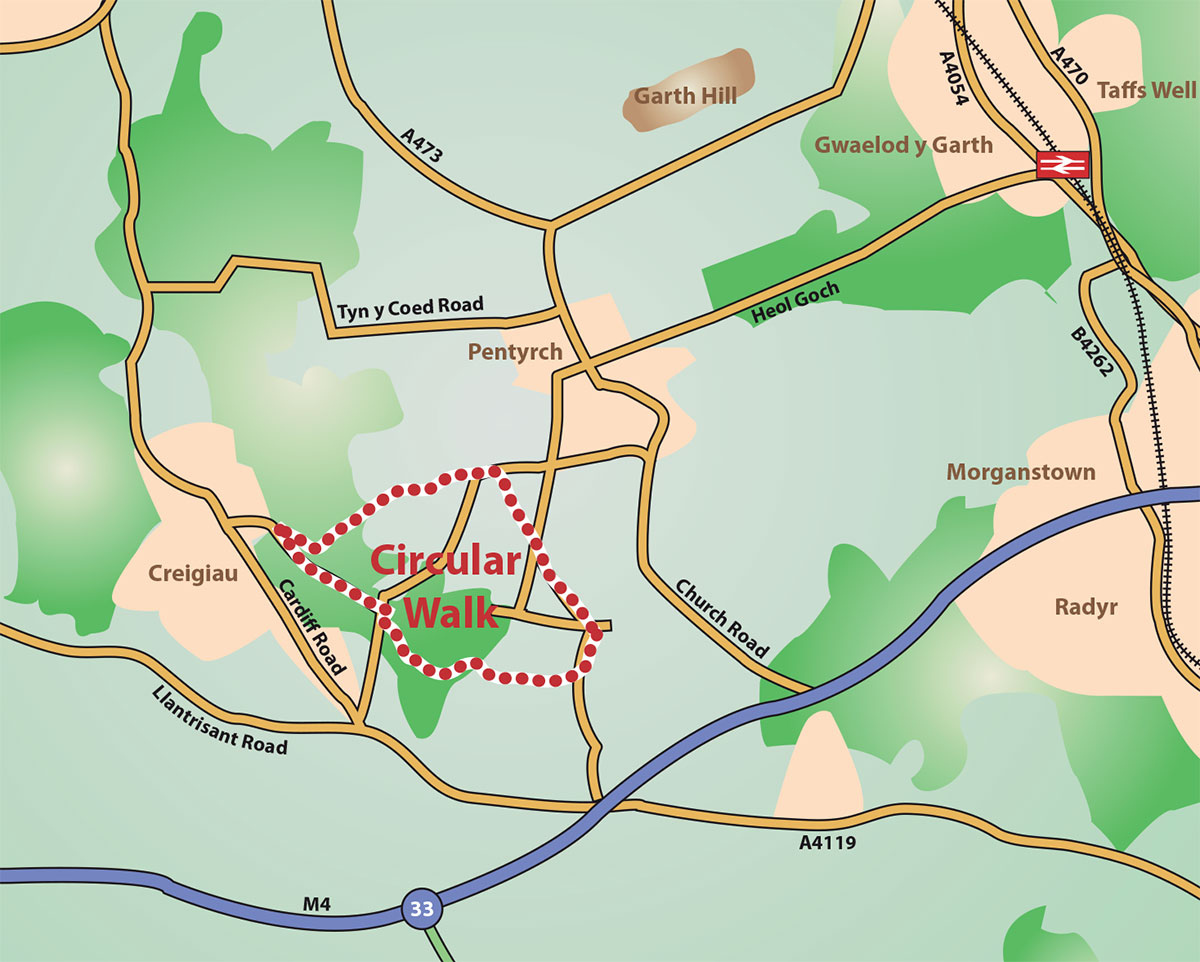 The circular walk includes some steep hills, a wooden stile, kissing gates and some steps. Sections of the walk are also along the highway and there are two roads to cross and care should be taken at these points. Way-markers with red colour banding are posted along the route for walkers to follow. 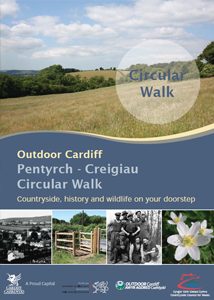 Craig-y-Parc woodland is an area of semi-natural Beech woodland. Large portions of the ancient woodland have been replanted with new Beech and coniferous specimens (or trees); however, there are still plants indicative of ancient woodland. These include: Wild Garlic (Ramsons), Wood Anemone, Pignut, Yellow Archangel, Dog’s Mercury and a beautiful Bluebell carpet in the spring. The woodland is also home to many bird species such as Blackcap, Goldcrest, Treecreeper, Green Woodpecker, Buzzard and Tawny Owl.

The first reference to Parc-y-Justice house dates back to around the 1530s when it held the magistrate court. It was here that financial accounts were brought to be approved by the Justice of Peace and various warrants were signed for the apprehension of wrongdoers.

In 1791, gruesome history was made when Catharine Griffith, a former Parc servant, and her husband, Henry James, were hanged for breaking into Parc-y-Justice and stealing a quantity of silver. About seven years prior to this incident, Catharine, at times with her husband Henry or another accomplice, travelled around the country stealing small amounts of items. This conduct eventually led to their execution. Catharine, at about 31 years of age, was the last woman to be publicly hanged in Wales.

Creigiau during the Second World War

In July 1942, during the Second World War, bombs fell on Pant-y-Gored Road. A cry went up that the ‘Woodlands’ house was on fire and by morning it was a smouldering shell. Neighbours tried to salvage furniture from the house while offering their sympathies to the owner, Mrs. Davies. The house, now repaired, still stands on Pant-y-Gored Road.

Despite the six yearlong conflicts, Creigiau was a haven of peace during the war. Families still used the train to go to Barry Island and the steady stream of seaside sun-seekers walking to Creigiau from Pentyrch was a familiar one. The reality of the war was brought home when hospital trains steamed into Creigiau Station. A score of camouflaged ambulances queued to ferry wounded American soldiers in need of treatment to the US Military Hospital set up at Rhydlafar. As the American servicemen settled into the community, they brought with them entertainment, live music and shared their allocations of beer, chocolate and cigarettes with the locals.

It was through the Taff Gorge that the bulk of east Glamorgan’s industrial output travelled (by road, canal and later rail) to Cardiff and the world beyond, becoming the biggest employer of labour for miles around. The establishment of iron-making in Pentyrch is due to the location of iron ore sited where the River Taff cuts its way through the southern rim of the South Wales coalfield. The early iron makers found that the most effective of the early furnaces were those that were built in frost pockets. This was because the cold air was denser and contained more oxygen which helped the process. Old furnaces discovered there were thought to be from the Elizabethan period, but eventually were identified by industrial archaeologists as dating from the Georgian period, in the 1740s. In 1879 the Pentyrch Iron Works closed down and attempts to form a new company came to nothing so that in 1888 the property was sold off.

The New Lan Colliery, opened in Pentyrch in 1872, supplying coal from several seams, including the Black, Forked, Wing Hard and Brass Veins, to the then adjacent Pentyrch Iron Works. The colliery employed about 300 men and boys with two thirds of them working underground. On an early Monday morning in 1875, a big explosion in the Brass Vein of the mine killed 13 men and injured 9 others. The mine continued to operate until World War One when men transferred to work in the newer deep mines in the valleys.

The walk starts and finishes just south of the sports ground on the corner of The Gables and Heol Pant-y-Gored.

The closest bus stops to the walk are on Heol Pant-y-Gored and Bronllwyn. Route Number 136, details of services can be found at www.traveline-cymru.info

Take the Coryton Line to Rhiwbina and join the walk at Rhiwbina Hill. For train times visit www.nationalrail.co.uk

Limited parking is available at the sports ground off the corner of The Gables and Heol Pant-y-Gored. 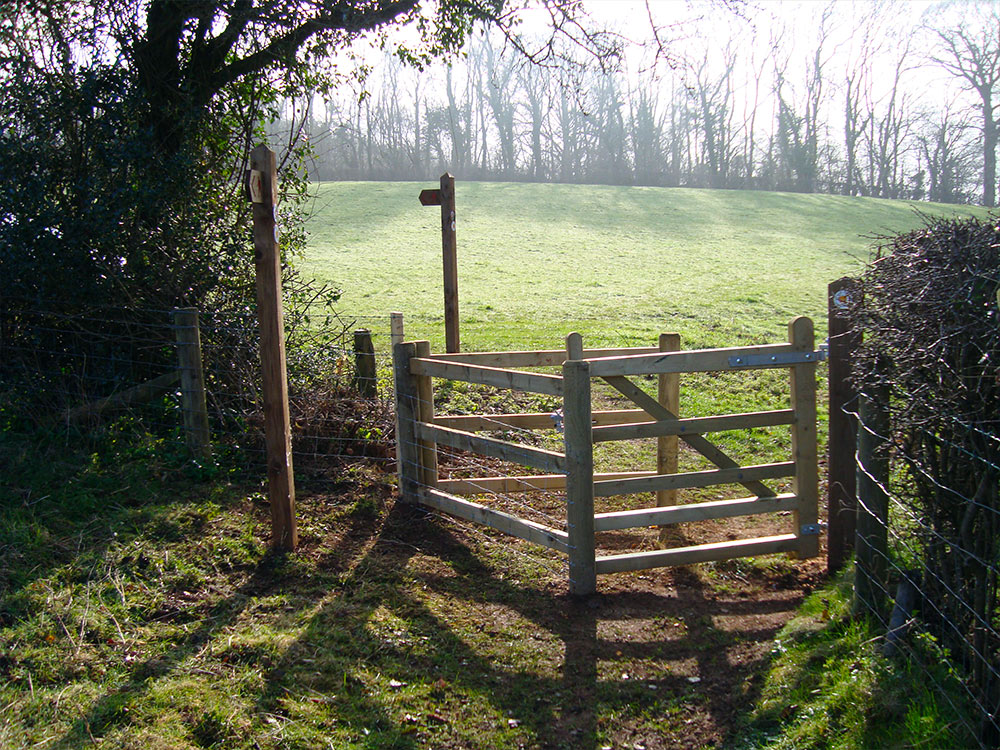 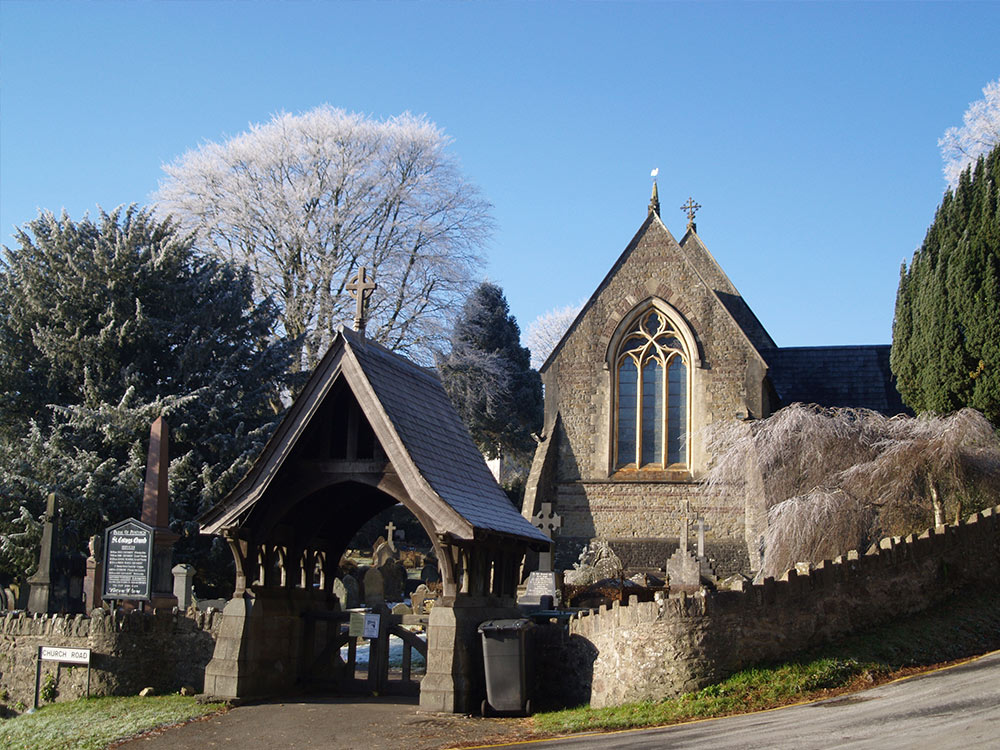